Yellow power coin used by Trini, actress Becky G in the 2017 rebooted film Power Rangers. Five ordinary teens must become something extraordinary when they learn that their small town of Angel Grove – and the world – is on the verge of being obliterated by an alien threat. Chosen by destiny, our heroes quickly discover they are the only ones who can save the planet. But to do so, they will have to overcome their real-life issues and before it’s too late, band together as the Power Rangers.

These coins can be seen throughout the film, most noticeably when the group finds them encased in obsidian. This hero coin, which gave the Rangers their powers is made of cast resin that has been tinted yellow with intricate line detailing on the front and back. at the coin has been aged to look like it has been stuck in stone, which you can see remnants of around the edges. This piece measures around 3″ in diameter and remains in excellent, screen used condition. This piece was originally sold via the studio sanctioned auction. 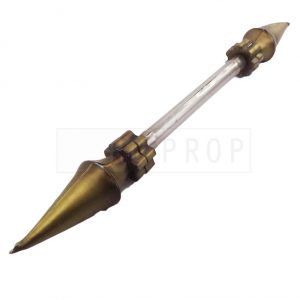