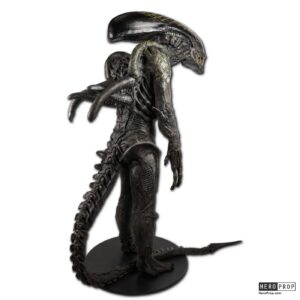 Original “Grid” Alien Warrior used in the production of the 2004 Paul W. S. Anderson science fiction film Alien vs. Predator. During an archaeological expedition on Bouvetøya Island in Antarctica, a team of archaeologists and other scientists find themselves caught up in a battle between the two legends. Soon, the team realize that only one species can win.

This full sized Alien Warrior was used in one of the films most notable scenes, where the Predator and Alien meet for the first time. The Alien warrior was captured with the Predators net, giving the Aliens head a grid like pattern. This full sized costume was used by the actor throughout the entire films run. The main costume is made of foam latex on top of a neoprene under-suit and features the signature look of the Xenomorph. The hands and feet both feature long claws and the neck area features holes for the actor to see while shooting. The long tail is also made of foam latex with a hard spear tip at the end, and the back tubing, which is a separate piece is also made of foam latex and the body of the Xenomorph features a grid pattern cast into the foam latex on the left shoulder.

The Aliens head is made of mixed material, such as a foam latex base with a fiberglass dome. The heads mouth features the signature Alien tongue, and attaches to the main costume via small push clips that are hidden under the foam latex. The dome features a fiberglass construction with an added piece of clear vacuformed plastic that allows the insides of the head to show through slightly. The vacuformed piece has the grid pattern cut into it and features yellow detailing simulating the Aliens blood. This entire suit is complete and mounted on a custom made mannequin with a round wooden base.

This piece is located in Las Vegas, due to the size of this display, special shipping arrangements will be required – please contact us prior to purchase.