Original prop skull found on the planet Earth in the SyFy re-imagined series Battlestar Galactica. This update of the late-1970s programme takes a decidedly darker tone as what’s left of humankind struggles for survival against the robot Cylons, who have killed millions. The Galactica, led by William Adama, protects a patched-together fleet of civilians – led by de facto president Laura Roslin – in search of a mythical planet called Earth.

This skull along with others were found in the series finale (along with the “skulls” of Cylons when the crew if the Galactica and last of the survivors found Earth. This piece is cast in resin and is painted white with hues of dark brown. This item has been aged by the production, and features a small break on the back/bottom and is hollow. This piece shows minor wear from use in the series but remains in excellent, production used condition. 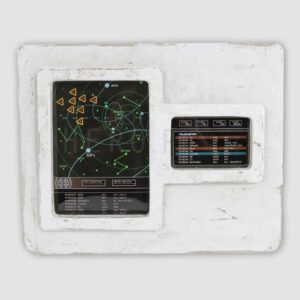 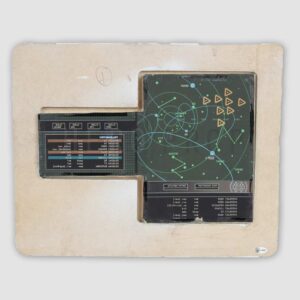