An original prop used in the production of the 1979 science fiction television series Buck Rogers in the 25th Century developed by Glen A. Larson.

This is an original prop pistol used by various cast members in multiple episodes of the series. Constructed from fiberglass with a silver and black paint finish this pistol is a hero light up version which features a red button as a trigger which powers a bulb when depressed to illuminate the perspex end section. The weapon lacks the cover from the base of the handle which reveals there is a 9V battery connector concealed within, this light up feature remains in working order. Originally the pistol featured a trigger guard which is lacking however there are various instances of these being damaged on screen.

Mounted on a custom display and  the pistol itself measures approximately 6.5″ long and remain in good production used condition lacking the aforementioned trigger guard and base and exhibiting some paint wear.

A displayable artifact from this celebrated science fiction production. 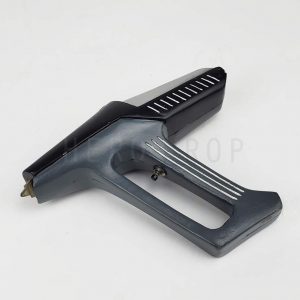 Buck Rogers in the 25th Century

Buck Rogers in the 25th Century

Buck Rogers in the 25th Century – Hawk’s Costume and Blaster