A stunt Lawgiver Mark II pistol used in the 1995 American science fiction action film based on 2000 AD comics character of the same name. It is directed by Danny Cannon and stars Sylvester Stallone in the title role. The film takes place in the year 2080 and depicts a dystopian world. Following an unspecified disaster that turned Earth into a “cursed” wasteland, the survivors established a corps of Judges whose role combines that of police, judge, jury and executioner. In Judge Dredd, Dredd, one of the most dedicated Street Judges, has been framed for murder by his own half-brother — the psychotic Rico, who plots to take over Mega-City One with an army of superhuman clones.

The Lawgiver pistol was the sidearm of choice for Dredd and the judges of Mega City One. When a hero, live-firing Lawgiver was inappropriate for use this style of the iconic pistol was used for stunt sequences or for scenes. Made of resin with a turned aluminum barrel and a machined static aluminum trigger. With a ribbed housing and the Hall of Justice crest on the side this lawgiver shows fine detailing across the piece, with a vented sight post. In place of working lights, colored acrylic inserts have been added. The item has had an industry professional give it  sympathetic restoration work to fix a crack that was present during storage. The piece is finished in black with red paint used for the “lights” along the sides. 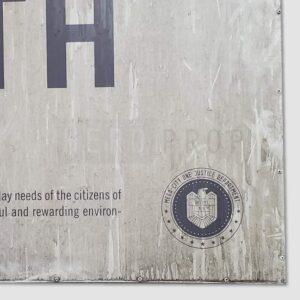