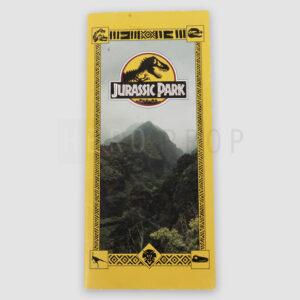 A visitor’s brochure from Steven Spielberg’s Oscar®-winning action adventure Jurassic Park. The park’s brochures were used throughout the film at various locations, including the Visitor Center and the Ford Explorer tour vehicles.

This double-sided paper brochure features a printed map of Jurassic Park on one side. This pinpoints different sites on the island, including the Visitor Center, helipad, electric fencing and dinosaur enclosures. The reverse shows a printed drawing of the park gates, with general information including a section in Japanese, a Kodak Film advertisement and a mountain terrain photograph that forms the front cover of the brochure when folded. This Park Brochure remains in good overall condition with only signs of light use. When folded measures 8 ¼” x 4” (21 cm x 9.5 cm). Also included is an Letter of Authenticity from the films credited puppeteer that controlled the body movements of the T-Rex, (name has been blurred for this public listing only).