Original equipment claw used in the production of the 2013 science fiction film Pacific Rim. Long ago, legions of monstrous creatures called Kaiju arose from the sea, bringing with them all-consuming war. To fight the Kaiju, mankind developed giant robots called Jaegers, designed to be piloted by two humans locked together in a neural bridge. However, even the Jaegers are not enough to defeat the Kaiju, and humanity is on the verge of defeat. Mankind’s last hope now lies with a washed-up ex-pilot (Charlie Hunnam), an untested trainee (Rinko Kikuchi) and an old, obsolete Jaeger.

Equipment like this can be seen being used by the technicians and mechanics working on the large Jaegers in the beginning of the film. This piece is made of fiberglass and resin and is multiple parts creating a large claw that can be moved into different shapes. This piece is painted grey and has been weathered to simulate a metal look. This item features white, blue and black paint detailing with Chinese lettering and attached plastic tube connectors on the top and a metal chain link where it would have been attached to a chain one set. This shows slight wear from use but remains in excellent, production used condition. Please not this item is oversized and overweight and will require special shipping. 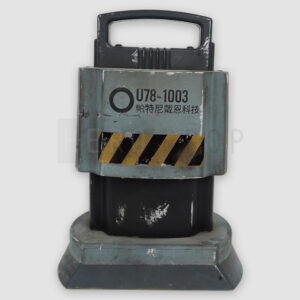