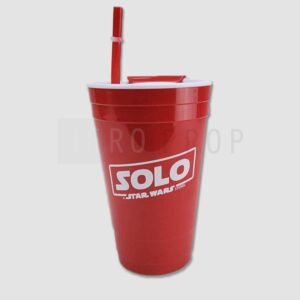 Crew gift given out to select members of the cast and crew during filming of the 2018 film Solo: A Star Wars Story. Young Han Solo finds adventure when he joins forces with a gang of galactic smugglers and a 190-year-old Wookie named Chewbacca.

This piece is a custom-made reusable plastic red solo cup with white lid and red plastic straw. This piece featured the films logo on the fort is white and is an “inside joke” as the code name for the film was “Red Cup”. This piece remains in excellent, production used condition.