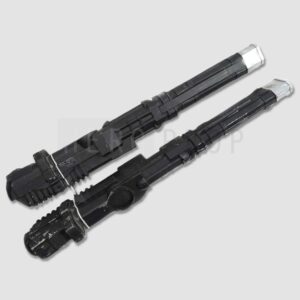 Large faux machine gun used on the drone’s controlled by Mysterio, actor Jake Gyllenhaal in the 2019 superhero film Spiderman: Far From Home. Following the events of Avengers: Endgame (2019), Spider-Man must step up to take on new threats in a world that has changed forever.

This gun can be seen on the killer drones that were featured in the finale of the film, The “Tower Bridge Attack”, was the final confrontation between Spider-Man and Mysterio. Very few actual drones were made for production as CGI was used, the few that were created  can be seen littered around the road from the battle. This piece is made of resin and fiberglass and has been painted black and features a metal mount for where it was attached to the drone for filming. This item remains in excellent, production used condition.