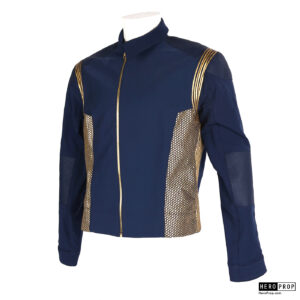 Command style uniform top featured in the production of the hit science fiction series Star Trek; Discovery. Created by Bryan Fuller and Alex Kurtzman for CBS All Access, the story of “Star Trek: Discovery” begins roughly a decade before Captain Kirk’s five-year mission — as portrayed in the original “Star Trek” from the 1960s — and a century before the events of “Star Trek: Enterprise.” The series follows the crew of the USS Discovery as they encounter new worlds and civilizations, delving into familiar themes and expanding upon an incident that has been talked about within the franchise’s universe, but never fully explored.

This is a command style top featured in the first season of the series and is the standard issue uniform used by Starfleet. This piece is made of cotton and spandex and features a zip up front with hundreds of small gold “delta” symbols screen printed on the sides with the same gold stripe detailing around the shoulders and the collar features a small metal clasp. This piece remains in excellent, production used condition. 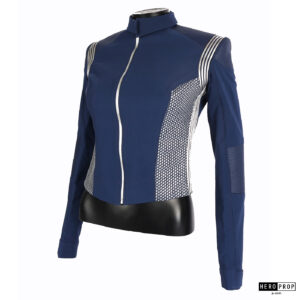