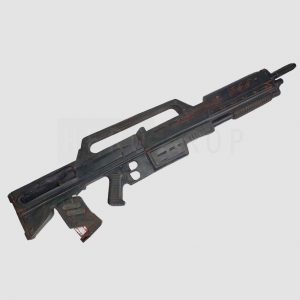 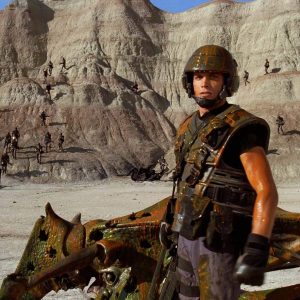 A stunt Morita assault rifle from Paul Verhoeven’s cult classic science fiction action film, Starship Troopers. This rifle was custom-made by the production team for use by various actors and stunt men during filming.  Morita assault rifles were carried by the Mobile Infantry throughout their campaign against the Arachnids, from their initial assault on Klendathu to the capture of the Brain Bug on Planet P.  Produced from a hero version of the firearm, the rifle is made of foam rubber with an internal metal sub-structure.

The main body of the weapon has been cast in dark green dense rubber with painted black components and a faux-silver magazine.  The rifle features intricate detailing on the receiver, magazine, body and grip. This piece has been documented as having being used by “Johnny Rico”, played by actor Casper Van Dien and as well as having been used by one of his stunt men Joey Box.

The rifle shows signs of production use, including minor paint wear, dirt, dust and mud remnants from having been used on set.  Additionally the rifle is covered in orange Tanker bug blood from Rico’s hand grenade scene. The orange bug blood, comprised of a mixture of tinted methylcellulose and monster goo can be seen covering Casper Van Dien from head to toe. The Morita remains in overall good condition and measures 39.76″ x 2.36″ x 11.02″ (101cm x 6cm x 28cm).