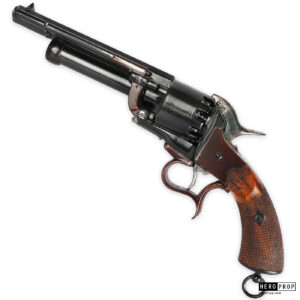 Stunt version of the signature LeMatt revolver used by the Man in Black, actor Ed Harris in the HBO series Westworld. Westworld isn’t your typical amusement park. Intended for rich vacationers, the futuristic park — which is looked after by robotic “hosts” — allows its visitors to live out their fantasies through artificial consciousness. No matter how illicit the fantasy may be, there are no consequences for the park’s guests, allowing for any wish to be indulged. “Westworld” is based on the 1973 Michael Crichton movie of the same.

The LeMat revolver is a vintage civil war firearm and was the signature weapon of The Man in Black and can be seen throughout the entire series run. This stunt version is made of a dense urethane rubber and was cast from an original firearm. The gun has been painted silver and black with a painted woodgrain handle and has been weathered by the production to look used. This piece remains in excellent, production used condition. This piece is accompanied by a custom made acrylic wall display.