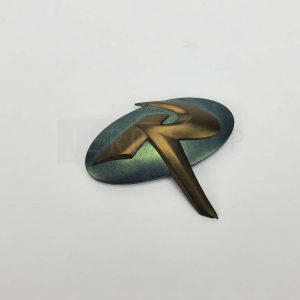 A production backup emblem for Robin (Chris O’Donnell) in Joel Schumacher’s superhero film Batman Forever. Robin wore an “R” emblem on his chest in the last half of the film to reveal to be Batman’s partner. Robin appears to wear a suit made of rubber and with this badge displaying a metal pin attachment, it would most likely have been made for the production and used as a backup only.

Made from resin, the emblem consists of an oval shape finished in metallic green paint with a prominent “R” finished in faux-gold. A metal pin is adhered to the back of the piece allowing it to easily be attached to a costume.