Stark Industries technical device featured in the production of the Marvel Studios superhero film Captain America: The First Avenger. It is 1941 and the world is in the throes of war. Steve Rogers (Chris Evans) wants to do his part and join America’s armed forces, but the military rejects him because of his small stature. Finally, Steve gets his chance when he is accepted into an experimental program that turns him into a super soldier called Captain America. Joining forces with Bucky Barnes (Sebastian Stan) and Peggy Carter (Hayley Atwell), Captain America leads the fight against the Nazi-backed HYDRA organization. After rescuing Bucky and his other fellow soldiers, Captain America, actor Chris Evans visits Stark’s laboratory to get outfitted with a new shield. While entering the lab, this piece can be seen sitting on a tale being worked on by a scientist.

This piece features a military green body with various electronic components on each end. The main body of the device features a small black placard with the “Stark Industries” logo. This item remains in excellent, production used condition. 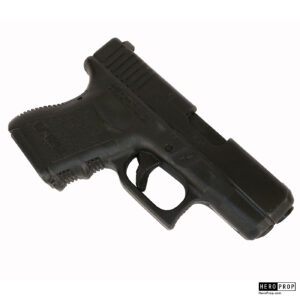