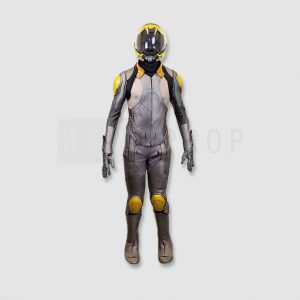 A Launchie Flash Suit from Gavin Hood’s 2012 sci-fi adaptation, Ender’s Game. In the film, Ender Wiggin (Asa Butterfield) is recruited to lead the International Fleet against the alien race known as Formics. Flash Suits such as this were used during the film’s training sequences in the Battle Room.

Consisting of a jacket (size girls medium), pants (size girls medium), boots (US size 7), gloves (size youth large), yellow flash suit pads, and Launchie helmet (medium). The jacket and pants are made of synthetic nylon material with a concealed zipper up the center of the chest of the jacket. On the right leg is a small magnet used to hold a Flash Gun, the pants also feature concealed clips which correspond to clips on the jacket. The helmet separates into three different pieces; cap, visor and jaw. The helmet features a hidden switch and battery compartment to operate an internal fan which remains untested.Overall in great, production used condition.