Dothraki Arakh used in the production of the George R.R. Martin HBO series Game of Thrones. Nine noble families fight for control over the lands of Westeros, while an ancient enemy returns after being dormant for millennia. These sickle type swords were the main sidearm of the Dothraki, the nomadic warriors who crossed the Narrow Sea with Daenerys and served as part of her main army.

This style weapon can be seen throughout the series, most noticeably in the eighth season finale battle. This piece is made of a very dense urethane rubber and features an ornate handle with cast in detailing. The blade protrudes out from the handle then curves into a sickle. This piece measures over 36” in length and remains in excellent production used condition. 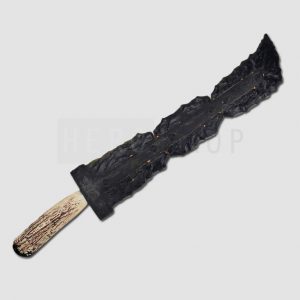