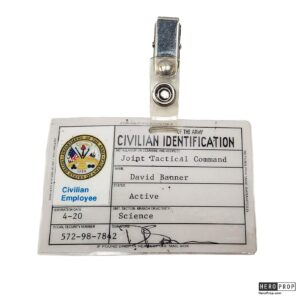 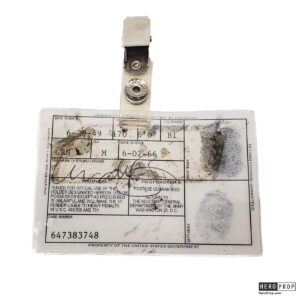 ID card used by the character of David Banner, actor Nick Nolte in And Lee’s 2003 superhero film Hulk. Eric Bana (“Black Hawk Down”) stars as scientist Bruce Banner, whose inner demons transform him in the aftermath of a catastrophic experiment; Jennifer Connelly portrays Betty Ross, whose scientific genius unwittingly helps unleash the Hulk; Nick Nolte plays Banner’s brilliant father, who passes on a tragic legacy to his son; and Sam Elliott portrays the commander of a top-secret military research center.

This ID card can be seen being worn by the actor in the film notable opening credit sequences created by Any Lee that mimic the pages of a comic book. This is a clear plastic laminated ID card noted for a “Civilian Employee”. The card has various information on the front such as name, status, division etc. The back of the card also features various information with a faux thumbprint and sticky residue that was used to adhere the ID card to the actors shirt during filming. This piece features a plastic and metal clip on the top and remains in excellent, production used condition.