“Fugitive” hero animatronic Predator head from the 2018 science fiction action film The Predator, directed and co-written by Shane Black and co-written by Fred Dekker. It is the fourth installment in the Predator franchise. A Predator ship crash-lands on Earth. U.S. Army Ranger sniper Quinn McKenna and his team are attacked by the Predator while on a hostage retrieval mission. McKenna incapacitates the Predator and has parts of its armor sent off by mail to prove the existence of extraterrestrial life. Government agent Will Traeger has McKenna captured and held for examination. Traeger also takes the Predator to a lab for experimentation and observation, recruiting evolutionary biologist Casey Bracket to study it, who discovers that the Predator’s genetic makeup contains human DNA. The Predator awakens, breaks out of its restraints, and kills the lab workers and armed guards, but spares Bracket, the only unarmed person, before escaping.

This one of a kind hero animatronic head created by the Academy Award®-winning special effects group Amalgamated Dynamics, Inc. (ADI) . This animatronic head used in close ups with moving servos and such still present and is hand painted with incredible detail. Professionally mounted on the actors life cast, hand painted glass eyes have been added, sympathetically stabilized with light restoration for display purposes and stability. A Studio ADI & Hero Prop Certificate are included. 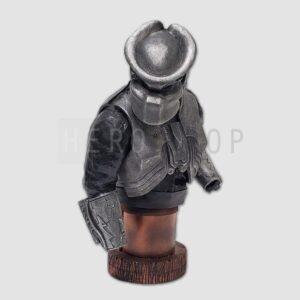