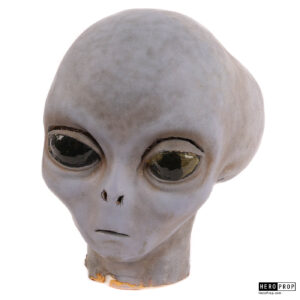 Original alien mask used in the production of the sixth season of the science fiction television series The X-Files. In one of the longest-running science fiction series in network TV history, FBI special agents investigate unexplained, mind-bending cases known as “X-Files.” Though the government is convinced that the outlandish reports are false, conspiracy theorist Fox Mulder (David Duchovny) and realist Dana Scully (Gillian Anderson), for most of the series, stop at nothing to prove that “the truth is out there.” Series creator Chris Carter also serves as executive producer of the thrilling pop-culture phenomenon.

This alien head was used in the episode “One Son”, where it is revealed that Mulder’s father gave his long lost sister over to the alien colonists. This piece was created for use by a child actor who portrayed the small grey aliens in the episode. This head is made of latex with an opening on the back held securely together with Velcro. The mask features the likeness of an alien with large black eyes and a featureless face. The head is a light grey in color and shows slight wear from use on set and storage over the years, but remains in very good, production used condition.