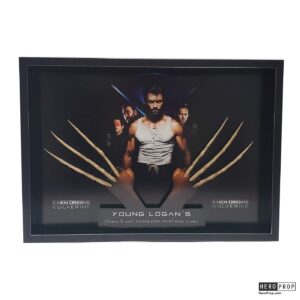 Set of original stunt bone claws used in the production of the 2009 Marvel superhero film Wolverine: Origins. Seeking solace from his dark past, Logan (Hugh Jackman), better known as Wolverine, seems to have found love and contentment with Kayla Silverfox (Lynn Collins). Logan’s peaceful existence is shattered when Victor Creed (Liev Schreiber), his vicious brother, brutally murders Kayla. Logan’s thirst for revenge propels him into the Weapon X program, where he undergoes a painful procedure to bond his bones with adamantium, making him virtually indestructible and more than a match for Victor.

This set of claws were used by Young Logan, actor Troye Sivan and can be seen in the opening sequence of the film where James Howlett first discovers his mutant powers. This set of claws were made for the child actor and each one features a custom made silver metal hand piece with attached metal bars that would run through the actors fingers and attach to the rubber claws. Each claw has been painted to resemble bone with hues of black and are made of urethane rubber. A small “L” and “R” are scratched onto the bottom palm grip of each respective set, and each one is labeled “soft”. The claws are presented in a custom made wooden display frame that can be opened to access the claws. With only minor signs of wear this set remains in good production used condition, the claws themselves measure 10” x 2 ½” x 1 ½” (25.5 cm x 6.5 cm x 4 cm). 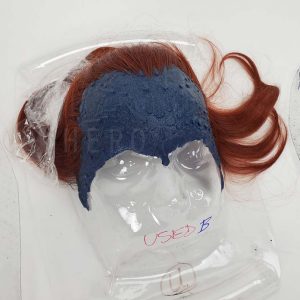