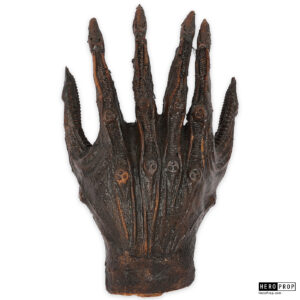 Original Xenomorph hand featured in the production of Ridley Scott’s 1979 sci-fi horror Alien. The crew of the Weyland-Yutani Corporation’s USCSS Nostromo were awakened from hypersleep by a distress signal from a desolate moon, and soon found themselves hunted by the deadly xenomorph. The Nostromo, a tug-ship that pulled the massive flat refinery model, is the primary spacecraft featured in the film and is the setting for the majority of its events.

This original hand was used on the full sized Xenomorph costumes featured in the film, and was later filled with foam to stabilize and preserve the hand over time. The hand is made of slip latex and features a realistic reptilian look and has been painted shades of light and dark brown. This piece shows wear from use over the years but remains in great, production used condition.