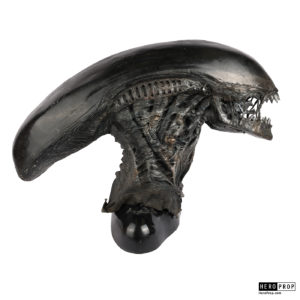 Original Alien warrior bust used in the production of the hit 2004 horror crossover film Alien vs. Predator. When the wealthy and ambitious Charles Bishop Weyland (Lance Henriksen) funds an expedition to Antarctica, he hopes to find a mysterious source of heat that has been detected. Led by a tough guide, Alexa Woods (Sanaa Lathan), Weyland and his team uncover a pyramid, but they also find malevolent parasitic aliens. Making matters worse, another extraterrestrial species, known as Predators, arrive to hunt the other aliens, with the humans caught in the middle of the conflict.

These warrior style Aliens can be seen throughout the films run as the main adversary of the Predator. This is a bust of the Alien head that was used on the actor who adorned the full sized Alien costume in the film. This piece is made of foam latex with a thin vacuformed plastic head dome. The foam latex is still in supple condition and features very intricate detailing such as the signature “hose” like details on the sided areas. The mouth section features attached latex detailing simulating tendons on each side of the face. The teeth are painted silver and made from resin and the mouth features the inner tongue section, with matching paint scheme and silver teeth. The head lists on top of a life cast of the actor down to the neck area. This item remains in excellent, production used condition and shows very slight wear from use in the film. 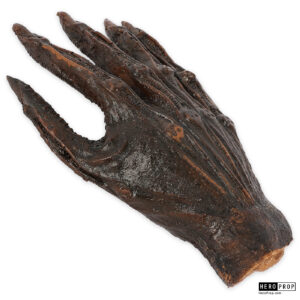 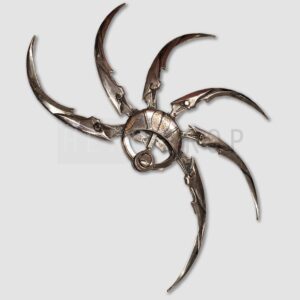