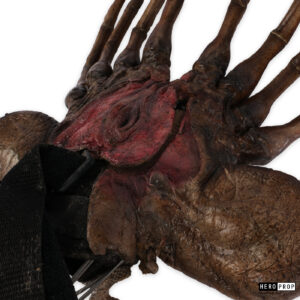 Original Facehugger puppet used in the production of the 2004 science fiction film Aliens vs. Predator. When the wealthy and ambitious Charles Bishop Weyland (Lance Henriksen) funds an expedition to Antarctica, he hopes to find a mysterious source of heat that has been detected. Led by a tough guide, Alexa Woods (Sanaa Lathan), Weyland and his team uncover a pyramid, but they also find malevolent parasitic aliens. Making matters worse, another extraterrestrial species, known as Predators, arrive to hunt the other aliens, with the humans caught in the middle of the conflict.

This puppet was used by a puppeteer who controlled the piece with his hand, as well as attached animatronic cable controls. The piece itself is made of foam latex and features eight arms near the front of the body. The body is hollow with black padding on the inside for the puppeteer. The face hugger has movable joints on each finger that were controlled off-screen by two handheld finger controls. The handles are made of aluminum and attached to the puppet by steel cable. The puppet is painted a dark flesh tone with hues of brown and shows slight wear non the form of hardening of the foam but still remains in excellent, production used condition. 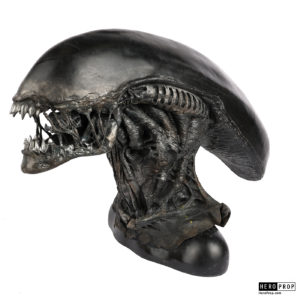 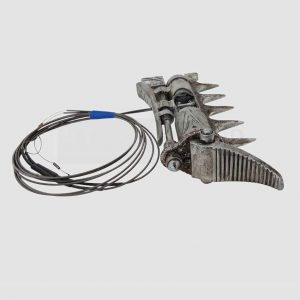