Hidden blade and display featured in the production of the 2016 film Assassins Creed. Cal Lynch travels back in time to 15th-century Spain through a revolutionary technology that unlocks the genetic memories contained in his DNA. There, he lives out the experiences of Aguilar de Nerha, a distant relative who’s also a member of the Assassins, a secret society that fights to protect free will from the power-hungry Templar Order. Transformed by the past, Cal begins to gain the knowledge and physical skills necessary to battle the oppressive organization in the present. This “hidden blade” was featured on display at Templar’s foundation.

This piece is and of cast resin and painted and aged expertly to resemble a worn pierce of metal with hues of rust. This piece is accompanied by a custom made acrylic display and remains in excellent, production used condition. 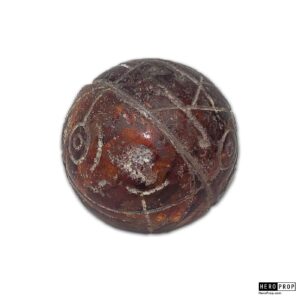