Original visual effects sword used by the character of Rita Vrataski, actress Emily Blunt in the 2014 science fiction epic Edge of Tomorrow. When Earth falls under attack from invincible aliens, no military unit in the world is able to beat them. Maj. William Cage (Tom Cruise), an officer who has never seen combat, is assigned to a suicide mission. Killed within moments, Cage finds himself thrown into a time loop, in which he relives the same brutal fight — and his death — over and over again. However, Cage’s fighting skills improve with each encore, bringing him and a comrade (Emily Blunt) ever closer to defeating the aliens. Known as the “Angel of Vurdun”, Rita can be seen fighting on the battlefield with this large section of broken helicopter blade.

As the poster girl for the war this sword became her weapon of choice. This piece was used during fight scenes that utilized special effects for ease and safely for the actor. This VFX version of the sword was used in many scenes where a large prop sword was not needed and can be seen in many of the films behind the scenes images and featurettes. This piece is made of a very dense polyurethane and features orange VFX tracking dots on each side of the short blade section, where a full size sword would be added later in editing. The piece is black in color and features a silver edge denoting where it was sharpened by the character, along with silver scuffs and scrapes simulating battle damage acquired on the battlefield. The well worn hilt is partially wrapped in black electrical tape, with brown paint applied simulating dirt and grime around the crevices to simulate use on the alien planet. This piece measures 24″ (60.9cm) in length and 6″ (15.2cm) across the blade, and remains in excellent, screen used condition. 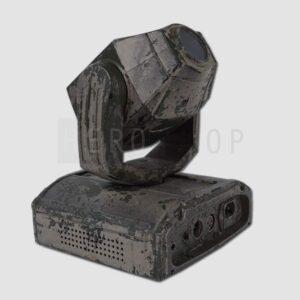