Large section of the Death Star model featured in the production of the science fiction classic Star Wars. The Imperial Forces — under orders from cruel Darth Vader (David Prowse) — hold Princess Leia (Carrie Fisher) hostage, in their efforts to quell the rebellion against the Galactic Empire. Luke Skywalker (Mark Hamill) and Han Solo (Harrison Ford), captain of the Millennium Falcon, work together with the companionable droid duo R2-D2 (Kenny Baker) and C-3PO (Anthony Daniels) to rescue the beautiful princess, help the Rebel Alliance, and restore freedom and justice to the Galaxy.

This piece which is made of biscuit foam and painted grey in color was used along side various other pieces to create the surface of the Imperial Death Star for filming miniature scenes for the film. This piece was created by the ILM model makers and features intricate carved line details and a large round “port” section in the middle. This piece measures 12” x 12” and remains in excellent, production used condition. 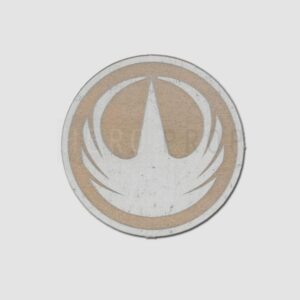