Set of Rank Patches made for use in the 2015 long awaited science fiction sequel Star Wars: Episode VII – The Force Awakens. As a new threat to the galaxy rises, Rey, a desert scavenger, and Finn, an ex-stormtrooper, must join Han Solo and Chewbacca to search for the one hope of restoring peace.

This is a set of production-made First Order officers nametape and rank patch created for the 2015 JJ Abrams film Star Wars: The Force Awakens. Both are constructed of black cloth with white and red embroidery. These were made by the production for use in the film on the First Order officer costumes, but ultimately not seen in the final version of the film. This set remains in excellent, production made condition. 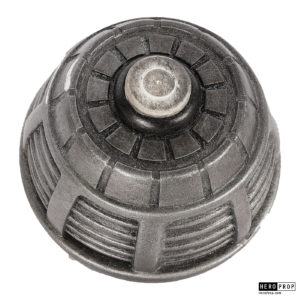