Futuristic backpack unit used by “Wolf Predator” in the 2004 science fiction film Alien. vs. Predator. During an archaeological expedition on Bouvetøya Island in Antarctica, a team of archaeologists and other scientists find themselves caught up in a battle between the two legends. Soon, the team realize that only one species can win.

This piece was used by Wolf Predator in the film and held a medical unit inside and attached to the shoulder cannon used by the hunter. This piece is made of fiberglass and is in two sections, the left section features intricate cast in detailing and the right sections base is a mirror copy of the left piece but has a large “shell” type section attached, which also features cast in detailing. This piece has been painted a metallic silver and washed with black to give it a used worn look. There are breaks in the fiberglass and resin this piece is made of, along with small chips from production use. 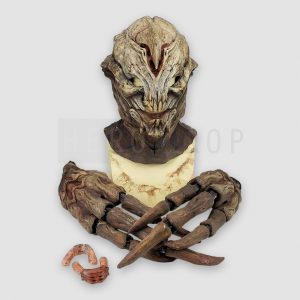 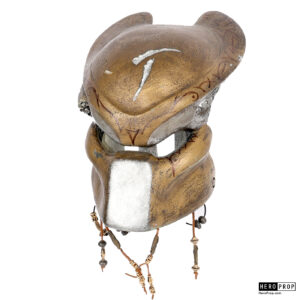