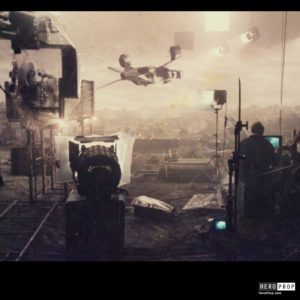 These components are from one of the 1/12th scale Drop-ship filming miniatures that were constructed at Pinewood Studios in 1985 for James Cameron’s Aliens. Several Drop-ships were built for the demanding shooting schedule that lasted approximately 8 months and they were photographed on an almost daily basis being exposed to fire, dust, falling debris, fog juice, etc. This collection of miniature components feature an original Drop-ship side pod wing which was designed to be shot with the missile pods either closed or extended, each arm were mounted on a hinge. Also included are 29 assorted rockets and bombs with some destroyed rockets. Pieces are constructed of resin and show heavy production use.